A Sea Safari for Sea Cows

Posted by No Kids, Will Travel on January 26, 2020 in Florida, Planning, Travel, United States 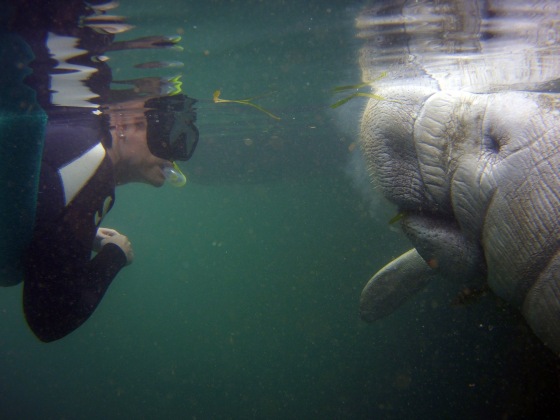 Amanda having a close encounter in Crystal River, Florida with the kindest creatures in the sea.

Last weekend, we had the chance to check another experience off our list of Florida adventures: getting up close and personal with the manatee.

Manatees are large, fully aquatic, herbivorous marine mammals commonly referred to as sea cows. You can find three different kinds of gentle sea creatures: the Amazonian, West Indian, and the West African manatee. The average manatee grows to 13-14 feet long and weighs around 1,500 pounds. You might think at first you are seeing a large seal but you’d be mistaken, seals are a completely different species.  The manatee has short, stubby paddle-like flippers and the one thick large flipper as a tail. You often see them swimming slowly in the shallow coastal waters where they graze on seagrass, much like cows do on land.

Now that you understand what we are talking about, we should tell you about the experience. We hooked up with Birds Underwater Dive Center, which offers manatee tours in the spring-fed canals of Crystal River. Visiting the manatees is best in January and February when air and water temperatures are cooler and the manatee swim into the springs and canals in order to stay warm. You have to remember even though it’s Florida, the water in the Gulf of Mexico is still only 63 degrees. The water in Crystal River is 72.  The air temperature is a little cool and despite the 72-degree water, you’ll want to wear a wetsuit since you’ll get in the water and just stay there for a couple of hours. The neoprene also helps you remain buoyant since the trip is classified as a float trip, not a dive or a swim. You are not supposed to dive down to manatees, swim with manatees, or proactively approach manatees because of state and federal protections. You can, however, float and observe which as we found is enough to get some real close encounters. Manatees are curious creatures with poor eyesight, so they routinely invade visitors’ personal space.

In fact, I was nearly run over by the large creatures and came within two inches of one as we went face to face. I know, with the approval of our knowledgable guide, Amanda was able to pet one. The experience was truly amazing. We swam with dolphins and that was cool, but the dolphins were part of a research program. The manatee, on the other hand, is truly a wild creature existing in its own habitat. I think it was more like being on safari. We were in their world and needed to be mindful of that.

Should you take a manatee tour? Yes! The manatee has quickly become one of my favorite animals.

Young manatee snuggling up with mother.

Manatee munching on some sea grass

Manatees, even adults, like to teethe on ropes (like this dock line) since they are constantly growing new teeth.
Advertisement