It’s 80 Degrees and Time to “Play That Hockey”

It was bound to happen once we settled in here in Tampa and hockey season started. We took this Saturday night and spent it at Amalie Arena in downtown Tampa. Don’t worry; we didn’t convert to being Lightning fans, the Caps were in town. The arena isn’t new but doesn’t seem to be showing its 25 years. The brightly lit building and very clean interior make it look like something built in the last couple of years. Walking from the car to an arena to watch a hockey game and *not* freezing is a big plus, too.

We were also amazed at all the Capitals fans wearing their red jerseys. We arrived early so Amanda could stand next to the glass and watch warm-ups up close. She realized that was the closest she’d ever been to the players.

The game was pretty great and the fan experience was pretty good, too. The fans were excellent. We’ve been at several different hockey venues and never been with a more polite audience. We didn’t even have a wildly drunk person in our section, a first. We could hear the fans around us making comments about the game and they seemed to be a mix of old-time hockey fans, newbies, and parents trying to explain the rules to their kids. The Capitals managed to win by a few goals and regardless of the disappointment for the hometown fans as we left the arena we got a few “good games” and high fives from Tampa fans.

I only had one real complaint. The food was expensive. A burger, hotdog, two sides of potato wedges, and two non-alcoholic drinks cost about $50. I understand that arena prices tend to be high but that felt excessive. We’d suggest eating a big meal before you go and purchase a drink only if you have to.

The scoreboard at the arena 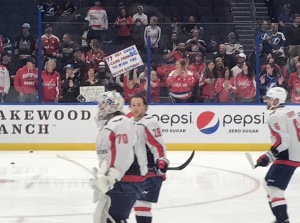