I think one of the first things we learned about Tampa when we were considering moving here was that it was the home of Big Cat Rescue.  We love big cats. We love cats in general. This love of big cats was definitely cemented on our trip to Africa and seeing these beautiful creatures in the wild.

Big Cat Rescue is one of the largest accredited sanctuaries in the world dedicated to abused and abandoned big cats. The sanctuary, which opened in 1992, works tirelessly to end abuse which often goes hand in hand with the private possession and trade of exotic cats. Big Cat Rescue has been constantly lobbying for federal legislation to make possession of big cats illegal in the United States. The sanctuary refers to itself as a retirement home to the 80+  lions, tigers, bobcats, cougars and other species that have taken up residence as their forever home since they will never leave the reserve.  The animals have mostly been abandoned, abused, orphaned, or retired from performing acts. The tours, open to the public, explain the reasons no one should keep a wild animal as a pet as well as relating the heartbreaking stories of these animals’ lives before coming to Big Cat Rescue. The tickets aren’t cheap ($39 plus tax), but the purchase price goes directly to managing the rescue which is mainly run by volunteers and interns.

We hope you enjoy some of the pictures of the felines we met during our visit. You can catch many of them on the Big Cat Rescue’s live cams, available through Explore.org. 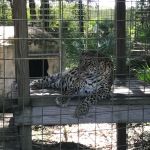 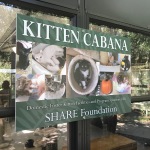 ← Paradise Discovered: The Unbreakable Virgin Islanders
A Naked Seat Back →