Posted by No Kids, Will Travel on April 7, 2013 in Adventure, Africa, Travel

Africa’s big five include elephant, rhinoceros, lion, leopard and buffalo. We were fortunate enough to see all of them (and many of them more than once) during our safari in Tanzania last month.

The first big five animal to be checked off our “must-see” list was the elephant. 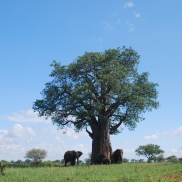 Elephants gather under a baobab tree in Tarangire National Park 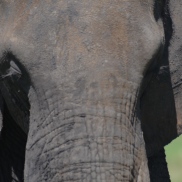 Check out those eyelashes!

This elephant is taking a dirt bath.

The elephants in Tarangire National Park kept their distance more than those we encountered later on the Serengeti, but our rented 500 mm lens helped us get fantastic photos to go along with our memories of these majestic giants.

We chased reports of lions off and on during our first game drive. Our guide, George, seemed disappointed we didn’t see any that first day, but Zeke’s mother said it best, “if we wanted to be guaranteed to see lions, we would have stayed home and gone to the zoo.”

Our patience only had to last until our second game drive. Near the end of the day we found a group of six females lounging in the shade of a baobab tree. We would see lions every day through the rest of our adventure. I could have spent untold hours just watching them settle into comfortable positions for naps (they sleep about 20 hours each day). 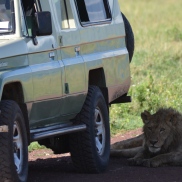 The lions in the Ngorongoro Crater enjoyed the shade of our safari vehicles.

A lion cub keeps an eye on a stunning adult male.

We checked African buffalo off of our big five list as we entered the Ngorongoro Crater. Herds of them were gathered on the inside slope of the 100-square-mile crater, almost like a lumbering welcome committee.

African buffalo welcome us to the Ngorongoro Crater. 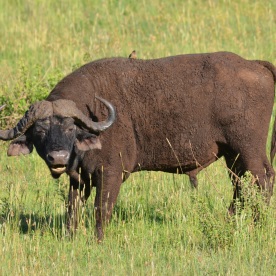 You can tell this is a male African buffalo because his horns join on top of his head.

Later that same afternoon, we spotted rhinoceros trotting across the floor of the crater. The rhino was the only animal we wish we could have been able to see at least a little closer. They were very mobile, but just happened to stay out in the middle of the grassy plains rather than approaching any available dirt road. Again, the 500 mm lens came in very handy!

A black rhinoceros enjoys a scamper across the green floor of the Ngorongoro Crater. 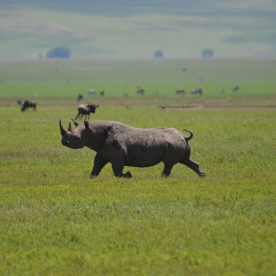 This black rhinoceros went for a trot across the Ngorongoro Crater, but was WAY too far away for any of the lenses we own. The rented lens brought him close enough for a great action shot!

By the time we arrived in our Serengeti camp (our final stop on our safari), we had checked off the last member of the big five: leopard. We spotted a leopard mother and her cub up in a tree on our way from the Ngorongoro Conservation Area to the Serengeti. The following afternoon we found another leopard in a tree – this one just about one kilometer from our campsite!

Our safari was an amazing experience, and it wouldn’t have been any less so if we had missed the chance to see one or more of the big five. These may be the animals people flock to Africa to see, but the area has so much more to offer. For example, who knew I’d find hyena so adorable?