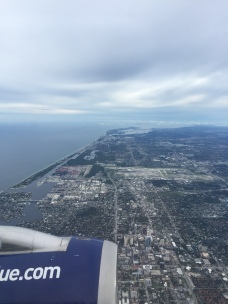 Our most recent trip ended a little differently than we had planned. I found myself spending the night in Fort Lauderdale and Amanda was at home in our own bed in Pittsburgh.

This little story began with airplane that couldn’t fly, and was replaced by a smaller plane. The problem is when you use a smaller plane for a fully booked plane many people who have tickets no longer have seats. The airline, JetBlue, handled it the best way they possibly could; they politely asked for volunteers to be bumped from the flight. They guaranteed, in return, vouchers for future JetBlue travel.

The opening offer was for $500, along with a free hotel stay and transfer to and from the hotel, as well as rebooking on a later flight. Not too shabby, but this particular group of passengers was very determined to get home and no one stepped up to take one for the team.

The gate crew and then the flight crew made many, repeated attempts over the course of an hour and a half to get customers off of the plane — all while patiently dealing with customers eager to get on the plane who were still left at the gate.

Quick reminder: It gets you nowhere when you’re rude to the flight crew or the gate attendants.

You may feel like you’ve been wronged, but the gate attendants did not oversell the tickets and the flight crew did not break the plane. The craft was unsafe and they were doing the best they could with a back-up.

I’m told it’s JetBlue policy to swap out an inoperable plane with a larger one, but in our case there were no larger jets available.  I understand everyone has their reasons for needing to be at their destination on time. In our case, someone needed to get home to care for a starving cat (no, she wasn’t really starving — but you try to tell Storm that).

I kept looking over at Amanda as a bidding war broke out. The crew was determined to get volunteers for the bump, so they kept increasing the value of the vouchers. The price reached $800 and after looking at Amanda and making sure she was comfortable with the decision, I volunteered. I did feel guilty still leaving her on her own. But I know she travels for work and could easily make it home.

Our next vacation is $800 closer (if we fly with JetBlue). So for the inconvenience of flying the next day, and to Cleveland as opposed to Pittsburgh (they drove me the rest of the 2.5 hours home) I receive $800 in credit. I really do think that’s a fair trade. 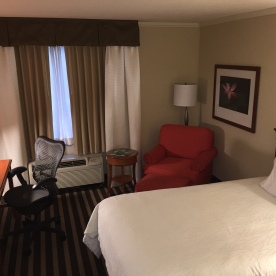 I noticed a comical thing as I went through security in Fort Lauderdale. If you have ever seen Up in the Air with George Clooney, he makes several statements about who not to get in line behind at airport security (namely old people and children). Well, Fort Lauderdale is filled with both. People packing strollers, multiple children and grandparents — all of whom seem confused by the security apparatus.

I just kept my patience and knew I had plenty of time. The flight didn’t exactly leave on time. But what can you do? I was fortunate to be given a seat by the bulkhead with extra leg room, and unfortunate enough to be seated next to one of those couples who put on airs yet fly a budget airline. I promptly put my headphones in and tuned them out. If you have a bag that’s so expensive you’re worried it will be scuffed up in the overhead bin, don’t take it with you and don’t be so stupid to buy such a bag in the first place.

The air travel in itself was unremarkable, which in my opinion is a very good thing. I deplaned in Cleveland and was given a voucher for taxi service. I was instructed to go to the taxi stand window near baggage control and show the woman in there the ticket. She directed me outside to the cab stand and I promptly asked which one of them drew the short straw since I was headed to Pittsburgh. The cabbie loaded up  my bags with a smile and we headed on our way.

I was very tired and fell asleep as we began our journey. I stirred around the halfway point as we hit the end of the Ohio Turnpike, where I paid the toll and then a mile later paid for the Pennsylvania Turnpike. I got to talking a little bit about travel and life with my driver, learning he was from Ghana (in East Africa), then New York, then — to get away from the noise of the city — he headed to Cleveland.

I don’t think seeing the Pittsburgh skyline has ever had me so relieved. I convinced him to drop me near our apartment leaving me to take the short walk to my own door for a welcome hug and the end of an interesting journey.