Posted by No Kids, Will Travel on September 7, 2014 in United States

It’s the first week in September and that means a trip to Baltimore for me and my little sister and the Baltimore ComicCon. I know that we’ve mentioned before on No Kids that spending time together is important in a relationship, even a relationship with your sibling.  Each year Andrea and I pick out some costumes and head to the convention to browse old comic books and look at all the geeky merchandise. We also do it to see how many “hey, can we get your picture?” requests we get. (This year’s answer: A LOT.)

We wrote a post a few weeks ago about going to see Spamalot, so decided that King Arthur and Sir Galahad were the perfect nerdy choice for us. I rented some faux chainmail and made the rest myself. I’m quite proud of what was accomplished on my limited budget. 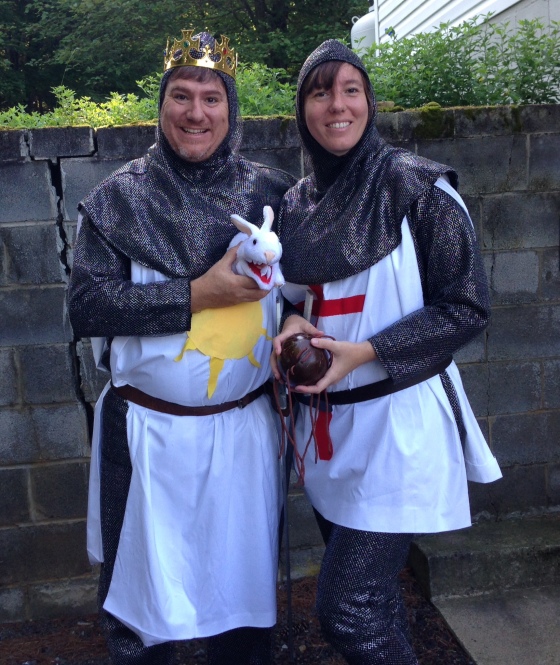 The point is, this dorky habit is a bonding ritual we have.  She, in spite of the fact that she’s a decade younger, is the sibling I connect with the most. She’s willing to dress up as a knight and walk the streets of Baltimore and doesn’t care about the looks you can get. I have to say it’s her bravery, a willingness to put herself out there, that I admire. But that’s enough of that mush for now.

We were attending a comic convention, so we weren’t the only ones in costume. We ran into several others, many our age, many in groups, some couples, some just friends — and that brings me back to the point. Cosplay, for many of us, is about making a connection through a shared experience. It’s the same as you might have at a Tough Mudder or sky diving, an experience you have with someone outside the norm of your daily existence. So, don’t knock until you’ve tried it.

The Inner Harbor of Baltimore hosts a lot of conventions and the businesses around the convention center are used to having unusual patrons. During Otakon Con (anime), BronyCon (My Little Pony) or ComicCon the sight of knights, wizards, robots and super heroes are taken in stride. You can go to the food court for at Harbor Place (a mall with shops and restaurants along the waterfront) and see a team of super heroes sharing a burgers and fries, just like in the end of the Avengers.

I’ll try and write up a post on the Inner harbor soon and give you the best places to stay, eat and visit, but for now I’ll leave you with some pictures of some great cosplay from Baltimore ComicCon.

Batman and a sassy Catwoman