A Night at the Theater with King Arthur (and a rabbit with sharp, pointy teeth)

Posted by No Kids, Will Travel on August 3, 2014 in History, Pittsburgh, Travel, United States

The phrase “who knew?” is said a lot these days in the Changuris household, especially in reference to our new home in Pittsburgh, Pennsylvania.

The “who knew?” of this post has to do with the theater scene and that there are six theaters in the Cultural District as venues for the symphony, opera, theater troupes, and Broadway-caliber musicals.  The theater we visited this weekend is the Benedum Center for the Performing Arts, which originally opened as the Stanley Theater in 1928 at a cost of $3 million.

The Stanley, named after Stanley Warner, was the home for Warner Brothers first-run films in Pittsburgh.  You could buy your ticket for 25¢ before noon and 65¢ for regular admission.  The Colonial Revival structure seats 2,800 and was the perfect example of a classic movie palace.  Between 1977 and 1987 the Stanley hosted The Grateful Dead, Bob Marley (his final performance before his death in ‘81), Kansas and Prince. A $43 million renovation to bring back the original grandeur was completed in 1987 and it was rechristened the Benedum Canter for the Performing Arts. The grand marquee and its bright lights are the first hint you are going somewhere special. You walk in and feel like you are in the Guilded Age with the original crystal chandeliers hanging above and 1,500 feet of polished brass railing snaking its way up and down the grand staircases, most of which is original to 1928.  We of course put on our Sunday best considering that a building this nice demands its patrons share the same air of sophistication.  The irony here is the play we went to see has a distinct lack of sophistication. Though the musical focuses on the noble quest of Arthur and his knights of Camelot as they seek the Holy Grail, we learn early on that this Camelot is actually a very silly place. 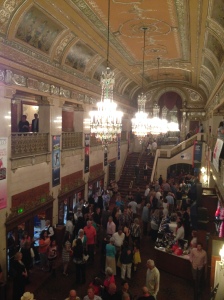 The foyer of the Benedum. 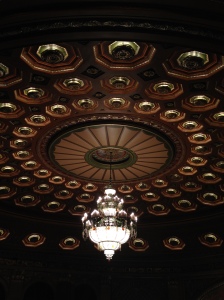 There are, according to Andi (who counted), exactly 100 octagon inserts in the ceiling of the auditorium.

The legendary British comedy troupe Monty Python’s take on the Arthurian legend is center stage in this adaptation of Monty Python and the Holy Grail called Spamalot, by Eric Idle and John Du Prez.  You will travel across the whole of medieval Britain facing much peril, such as the Knights Who Say Ni, a GREAT AND POWERFUL SORCERER named Tim, and Killer Rabbits (run away!) as they search for the Grail (to be found in a most unlikely place).

The adventure was not for the faint of heart or those who just don’t get it (like Amanda), so my sister and sometime guest blogger Andi was my date. The seats were in the upper balcony but the view wasn’t bad. We didn’t even have anyone in front of us, having chosen to get seats behind the railing.  I’ve found that stage productions make a great attempt to ensure even the cheap seats are great seats. We laughed from almost beginning to end. The new music blended with the old numbers and fit perfectly into the story.  The best part of this production was that it didn’t take itself too seriously, constantly breaking the fourth wall and it not seeming forced. We had a blast.

The experience has me ready to see what else the city’s theater scene has to offer in productions and, if the grandeur of the Benedum is any indication, the history and architecture, too.

3 comments on “A Night at the Theater with King Arthur (and a rabbit with sharp, pointy teeth)”