Again, if you haven’t read Dan Brown’s latest novel, Inferno, don’t worry. While this post does reveal some of the locations the characters visit, it does not contain any plot spoilers.

In our first Walking Inferno post we left our hero and heroine standing in front of a nondescript door next to a grotto in the Pitti Palace in Florence. Zeke and I have walked through that door, although we were coming from the other side. As Brown describes it:

Perhaps twice a day, a VIP tour would arrive outside the space, having walked all the way from the Uffizi Gallery. Ernesto [the guard] would greet them, unlock the metal grate, and permit the group to pass through the little gray door, where their tour would end in the Boboli Gardens.

These “VIP” tours can be hard to book, but only because they sell out fairly far in advance. You can’t just drop by the Uffizi (or even the Walking Tours of Florence office) and join this tour, but if you buy your tickets about six months before your trip you should be able to get in just fine.

As Brown mentions, the tours begin in the Uffizi Gallery, home to masterpieces such as the Portraits of the Duke and Duchess of Urbino (trust me, you’ve probably seen it), and Botticelli’s La Primavera and The Birth of Venus. Our guide gave us a detailed tour focused on the highlights, which was nice because we had walked the entire gallery on an earlier trip to Florence. Then it was on to Vasari’s famous corridor.

From the Uffizi Gallery you can see the Vasari Corridor as it snakes its way toward the Ponte Vecchio.

Looking down the River Arno from inside the Vasari Corridor. 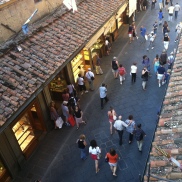 Looking down on the tourists walking the Ponte Vecchio from above.

To attend church services, the Medici could simply peer through this window inside their exclusive passage. 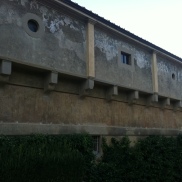 The corridor continues beyond the gardens, but our tour ended here.

Nowadays, the Vasari Corridor still served as a safe haven, although not for Medici aristocrats but for artwork; with its seemingly endless expanse of secure wall space, the corridor was home to countless rare paintings-overflow from the world-famous Uffizi Gallery, through which the corridor passed.

Langdon and Sienna rush through the Vasari Corridor as they try to reach the Palazzo Vecchio for another clue, but our tour was leisurely, allowing plenty of time to admire dozens and dozens of portraits on display.

Langdon and Sienna moved to the portal and peered out, seeing that they were currently perched above the Ponte Vecchio-the medieval stone bridge that serves as a pedestrian walkway into the old city. Below them, the day’s first tourists were enjoying the market that has been held on the bridge since the 1400s.

That sounds familiar (see photo above).

While we’ve never walked (or dashed through) the Vasari Corridor between the Uffizi and the Palazzo Vecchio like Langdon and Sienna, we have visited the palace from the more traditional entrance from Piazza della Signoria.

That’s the Palazzo Vecchio at the end of the street, look closely and you’ll see Zeke and me in our wedding attire! 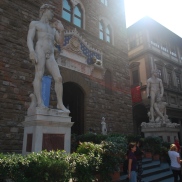 This reproduction of Michelangelo’s David stands at the entrance of the Palazzo Vecchio. Hercules and Cacus stand on the other side of the doorway.

The Loggia della Signoria is home to even more statues.

The Piazza della Signoria is full of statues, from Ammannati’s Neptune to a reproduction of Michelangelo’s David. There seem to be two camps when it comes to David, those devoted to the original (which is inside the Accedemia Gallery) and those who prefer the reproduction (because it’s outside, where it would have historically been enjoyed). Take your pick, but we’ve been happy with the reproduction on our three visits to Florence.

Langdon and Sienna’s adventure moves on, both to other parts of Florence (including the famous Duomo and its famous baptistery) and to other cities in Italy and beyond. I think it’s fair to say our favorite parts of Inferno took place in our favorite Italian city.