A Day Trip to the World

Posted by No Kids, Will Travel on November 24, 2019 in Florida, Planning, Travel, Uncategorized, United States

We live an hour away from a land of dreams. A world where fantasy and reality meet to inspire. You may think we are talking about the Magic Kingdom. You’re close but we are talking about the Experimental Prototype Community of Tomorrow or EPCOT for short. The vision for EPCOT was to include an urban city center, residential areas, churches, schools and a series of mass transportation systems that would connect it all. The idea of a city of tomorrow where the best and brightest would live, innovate, and change the world, unfortunately, died when Walt Disney, the visionary mind behind it passed away in 1966. A version of the idea of EPCOT was reborn in 1970 as the Walt Disney Company decided to build two new theme parks near Orlando, Florida. (1hr 15min from our home in Tampa). The new theme park, EPCOT Center opened in 1982 and took the form of a permanent Worlds Fair showcasing innovation through entertaining and educational interactive programing. A World Showcase, my favorite part, was also opened. The showcase is a series of exhibits, shows, and shopping representing countries like, Italy, Norway, and Japan complete with architectural representations of each region’s signature buildings and landscapes as a way to immerse you in the world. We learned upon researching this article that in 1994 the park was renamed to simply “Epcot,” dropping the acronym and “Center” from the official name.

I first visited the park during Christmas in 1983, my parents loaded my two other siblings, my sister Andi wasn’t born yet, into a burnt orange Dodge van with no back seats and drove from Washington, DC to Florida. We stayed off property at the Motel 6, and as kids who grew did not grow up in Florida realized quick, we could go swimming in December because Florida is very different than DC. I remember a lot from that trip 2-days in the Magic Kingdom and 1-day at EPCOT but the trip to EPCOT stands out in my mind. I remember being amazed at the “Land” exhibit where they introduced me to the idea of hydroponic gardening. I remember loving visiting the World Showcase. The toy Chinese sailboat sat on my dresser for nearly 30 years. I had always wanted to go back so Amanda and I know living so close decided this extended weekend would be the best opportunity. The park did not disappoint. The rides, like Spaceship Earth that is a history of science and innovation (narrated by Dame Judy Dench), was a great mix of history and nostalgia with its animatronic people. The Land ride was just as fascinating as it was for me today as a child. The World Showcase was not only fun but very interesting in a very different way. I was a world traveler now and have visited and gotten to know several countries and their cultures on a more intimate level and now being able to compare the real Tower of London with the facsimile or the Doges Palace in Venice was fascinating.
I know its not our typical recommendation and can be crowded compared to our typical trip recommendation but a trip to Epcot is one of those things we suggest doing if you’re in the area. It’s not a yearly thing for us, but we might go back again in another couple of years just to compare notes. 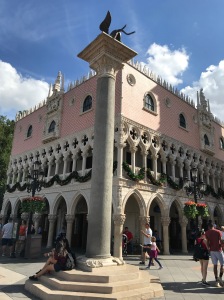 ← Relaxation One Tweet at a Time
Enchanted Christmas- St. Petersburg →