A Revelation at Arlington Cemetery

Posted by No Kids, Will Travel on November 10, 2019 in Travel, Uncategorized 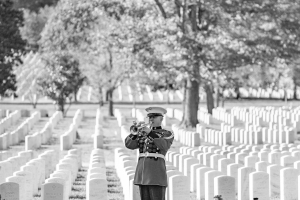 If you visit Arlington National Cemetary just across the Potomac River from Washington, DC there are many things to move you. The wide-open spaces of the military cemetery and its rolling hills with its evenly spaced graves with identical markers are easily considered beautiful. The reverence and tradition of the “Old Guard” unit that marks guards the Tomb of the Unknown. The baseballs that are left at the grave of Abner Doubleday the inventor of the sport that has meant so much to so many. The quiet solemn light of the Eternal Flame at the grave of US President and Navy Veteran John F. Kennedy. The most moving thing for me at Arlington National Cemetary is what is on the back of the tombstones, the names of their spouse. I had never thought of it until the moment I looked at the back of a grave marker. The soldiers and sailors who were lucky enough to find love and marry are allowed to have their spouses buried with them even in a military cemetery. I guess it’s only natural that they wouldn’t have to choose between resting with who they fought with and who they fought for. We thank all the veterans for their service and their spouses for the sacrifice of precious years of their lives together in the name of that service.