Posted by No Kids, Will Travel on October 27, 2019 in Beaches, BVI, Travel, United States, USVI

The Florida-Caribbean Cruise Association (FCCA) announced at its conference this weekend that they are stepping up efforts to make the USVI an even greater destination for the cruise industry. The USVI delegation, which included Commissioner of Tourism Joseph Boschulte, his team at the Department of Tourism and representatives from The West Indian Company Limited and the Virgin Islands Port Authority, was briefed by cruise industry leaders to help them understand and respond to the growing needs of the cruise industry. The sustained infrastructural investment the territory is making on St. Thomas by revamping the port in Charlotte Amalie, improving Main Street in downtown, and dredging projects for the cruise ships were all discussed at the meeting.

Governor Bryan also referred to the need to rebalance the industry: “We have a very mature tourism product in St. Thomas and we have an emerging market in St. Croix (and) St. John. (We must determine) how we combine those things in the right way that not only gives us the spend that we want but also attracts the type of customer that’s going to have the vacation that they want in the U.S. Virgin Islands.” 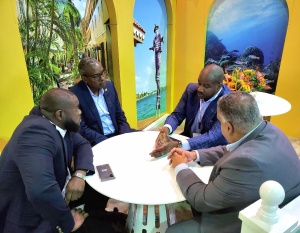 The FCCA and the USVI also had discussions on the inclusion of the other islands and territories like the British Virgin Islands and St. Lucia in an overall plan for the growing cruise industry.

← A Naked Seat Back
The Scarlet Rails of South Florida →