Posted by No Kids, Will Travel on May 19, 2019 in Beaches, Tampa, Travel, United States

We’ve been living in Tampa for almost a month now and we’ve finally settled in enough that we decided to take a little trip to the beach. Amanda asked around at work and the gym to get recommendations for which beach to try first. She got several answers and after doing some research we settled on Honeymoon Beach at Honeymoon Island State Park.

Honeymoon and its sister Caladesi were originally one island; they were halved by a hurricane in 1921. The island became a popular destination in the 1940s when it was marketed as a honeymoon get-away-from-it-all spot. The second world war closed the resort and it fell into disrepair. The state of Florida purchased the island in and its sister in 1974 and created the state park in 1981.

The trip there from our apartment only took about 30 minutes. It’s the fastest we’ve ever made it to the beach from our homes in our lives. We got there around 11 and the park was filling up fast. Entry to the park costs $8 per vehicle (up to 8 passengers). The beach itself is rather narrow so getting there early is the only way to secure a good spot. We opted to rent a couple of chairs and an umbrella for $25, it’s worth it considering the sun down here is far more intense that we are used to. The water was warm with visibility of about 2-3 feet. You had to swim across a significant stretch of rocks to get to the sand bar. Once you were on the sand bar it was quite pleasant.

The second wave of people began to head to the beach around 1 p.m. and we decided to be best to free up some space. We grabbed our bags, dusted off the sand and took the short walk back to the car for our quick trip home.

We have plenty of beaches on our to-be-explored list but Honeymoon is one we’ll definitely return to. 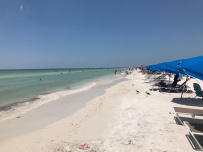