Posted by No Kids, Will Travel on July 22, 2018 in Adventure, Travel, United States

Our day started at 5am.

We needed to get to the airport and fly to Atlanta and then on to Huntsville. The trip only took about five hours thanks to the very short layover in Atlanta. We had decided that staying in a dorm at our age wasn’t something we were interested in, so fortunatly a Marriott is directly ajcent from the entrance to the U.S. Space and Rocket Center. We checked in there, changed our clothes and headed over to for check-in and orentation.

We were assigned to a group of 15 adults and called Pioneer after a series of NASA space probes. Our fellow Space Campers were from all over the U.S., Canada and the United Arab Emirates. Our ages ranged from people near their sixties those barley in their twenties. We felt right at home in the middle. We were led by Space Camp Crew Chief Amanda McBride. She was, as you’d expect, packed with knownlage about Space Camp, the history of space, and a love of NASA. 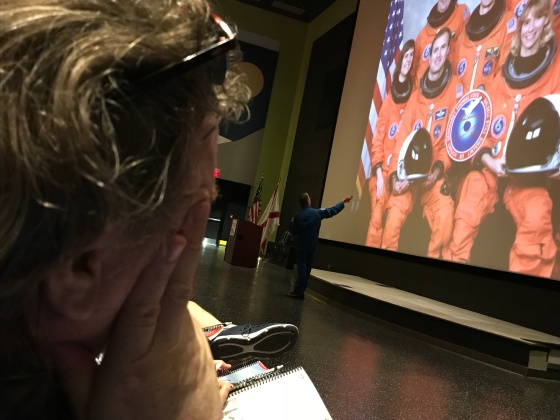 We kicked things off by listening Dr. Don Thomas recount his experiences flying into space on three shuttle misisons. We followed that up with a quick tour of the facility and the rocket park.

Zeke, hard at work on the ISS.

The team then split up into groups and endered some of the simulators. I became the commander of the International Space Station while Amanda became the space shuttle pilot. We both learned to love checklists. You are constantly going through checklists as the simulation manager throws problems at you. I found a big part of these experiences are dependent on communication. The biggest challenge was that we were a bunch of adults who had just meet a few hours earlier, each with a lifetime of experiences to take into account. We worked that simutlation for two hours before breaking for dinner.

Getting strapped into the Multi-Axis Trainer

We continued with a model rocket building class before taking a spin in the multi-axis trainer. The device spins in various directions simulating a tumbling space capsule. The trainer was used in the early days of the Mercury program.

Our day wrapped up and after 9:30pm. Amanda and I got back to our room, cleaned up and promptly fell asleep, exhausted.

We  had a lot more to do on Saturday. We’ll update that post next week.