Posted by No Kids, Will Travel on March 18, 2018 in History, Travel, United States

The Pro Football Hall of Fame is the museum and monument to the men and women of the NFL. The museum opened in 1963 enshrines players, coaches, franchise owners and front-office personnel for their exceptional contributions to the league. The HOF is located in Canton, Ohio. Why Canton, you ask? The American Professional Football Association, later to be known as the NFL, was founded in Canton in 1920. The other reason, the Canton Bulldogs were a successful team in the early years of the league. In 1921–1923, the Bulldogs played 25 straight games without a defeat (including 3 ties), which as of 2018 remains an NFL record. The team was then moved to Cleveland where it was eventually dismantled after the owner couldn’t find another buyer. 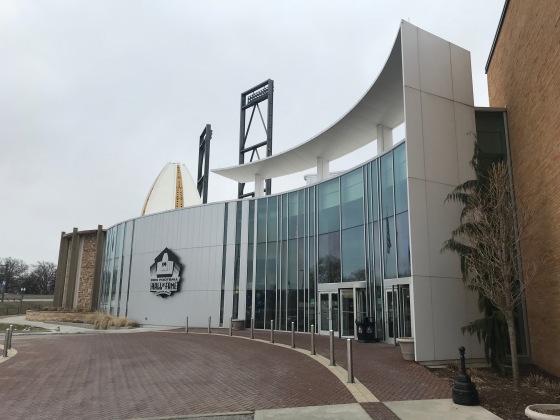 The Hall of Fame sees 200,000 visitors annually and brings in roughly 18-20 million in revenue much of which goes into its festivals, the museum and a massive expansion project called the Johnson Controls Hall of Fame Village.

“It will be the first-ever sports and entertainment ‘Smart City.’ Ten major components will be integrated through technology to subtlety and seamlessly share the values from the game – commitment, integrity, courage, respect and excellence – with guests in a way that will impact their lives.” according to the HOF website.

From our current home base in Pittsburgh, the Hall is less than two hours away; it was an easy day trip even through the snow flurries. As lifelong Washington Redskins fans, we were most excited to see the memorabilia from the team’s better days in the 1990s. We spotted an Art Monk trading card, Robert Griffin III’s grass-stained jersey from a game against Cleveland where he broke a record for rushing, and Jordan Reed’s jersey from the game where he became the fastest tight end to complete 200 catches. We were on the lookout for Zeke’s grandfather’s marching band uniform — it’s at the Hall but was not on display during our visit.

Another highlight of any visit to the Hall is the Hall of Fame Gallery, which is where the busts of every inductee are displayed. 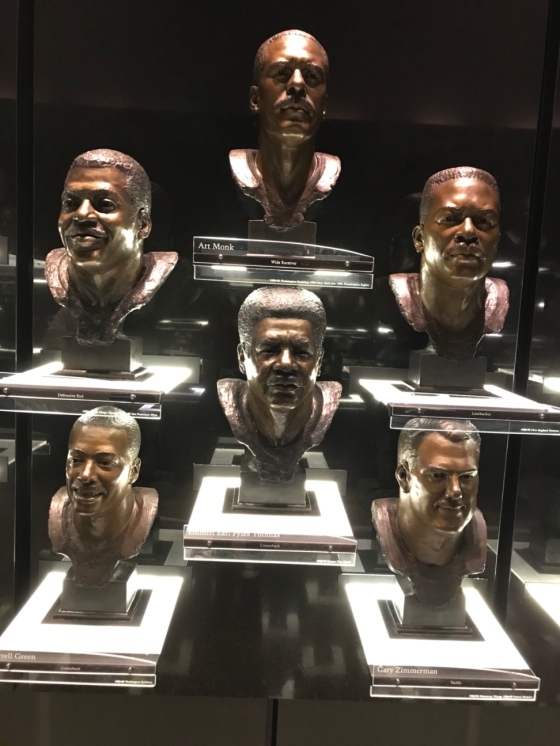 Amanda was quick to move down the line to spot her favorite Hall of Fame members: Art Monk and Darrell Green. Green even responded to her tweet about our visit.

Looks to be aging pretty well lol! Hope you had a great time. https://t.co/9ldw6dMUDx