Posted by No Kids, Will Travel on April 9, 2017 in Pittsburgh, United States

Spring is finally here in Pittsburgh (even though it snowed — a lot — on opening day for the Pittsburgh Pirates and the fans froze in the stands). At the same time, fans of a different kind flooded the warm hallways of the David L. Lawrence Convention Center and made me stand up and take notice.

Tekko is the premier event sponsored by the Pittsburgh Japanese Culture Society and one of the fastest-growing anime and Japanese pop culture festivals in America. Tekko fills the hunger for anime conventions as an outlet for cosplay and camaraderie, drawing attendees from across the United States. It may be considered small compared to other conventions, but the growing event is expected to hit 9,000 participants this year. The Pittsburgh JCS brings in big-name talent and hosts amazing events without the overcrowded madness of the top 10 conventions. 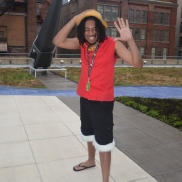 Monkey D. Luffy from the anime One Peice

The best part for me is that the convention center is just a short walk from our apartment. I’m a geek to begin with and love anime, so the convenience factor made attending this spring event to hard to pass up. I really get a kick out of seeing all the people in elaborate cosplay and sitting in on really interesting panels that discuss issues like feminism in anime and the comparison of eastern and celtic mythologies.

I think something quite clever going on at the convention is the Extra Life Gaming Marathon. A gaming marathon, especially if you play online Massive Multiplayer Online Games is a great place to raise your XP (experience points) — trust me that’s important — and earn some money for a good cause. The gaming marathon works a lot like a charity walk; you find sponsors and log hours online with all the money going to the Children’s Miracle Network. You don’t have to be even be a part of the convention to make it happen. You simply have to sign up on Extra Life.

We have one more day, Sunday, at the convention before it’s over and can’t wait to drop in on a few more panels and get an eyeful of the creative cosplay.