Posted by No Kids, Will Travel on August 12, 2016 in Uncategorized

The end of the more than decade long run of Otakon, an anime and Japanese pop culture festival, in Baltimore is coming to an end. The three day long festival is moving on after 17 years at the Baltimore Convention Center. Otakon will open its doors one last time in Charm City before moving down the road to Washington, DC. The convention that once ranked in the top three anime conventions in the U.S. lost its title because it needed more space to grow. Otakon has found that room 60 miles to the south with its eyes on regaining its leading role in the Anime Convention community.
“We want to grow because the more people that attend the more money we are able to spend creating a better convention experience,” says John C. Gluth, Otakon’s 2016 Convention Chair.
We know from experience that Otakon is an amazing celebration of Otaku culture and this year we are going to have one hell of a party saying goodbye to the Inner Harbor of Baltimore.  You can still register at https://www.otakon.com/

The convention is packed with something for everyone who loves anime, manga and jpop culture. The Otakon pregame on thursday night is an outdoor music festival with a Yukata contest, to select their version of a Miss Otakon. A yukata is similar to a kimono, but made from cotton and not silk. The contestants will be judged on the beauty and design of the yukata and the poise  to which its presented. The convention will have all sorts of panels to attend as well, from favorite shows of the 80’s to feminism in animation.  You can also attend meet and greets of voice actors of your favorite anime.  Have you ever wanted to experience the life of the rich and have a maid wait on you hand and foot? Well you can by stopping by the maid cafe (reservations needed) where costumed maids will serve you tea and call you master.

We think one of the best parts of the convention is the “Artists Alley”.  A large room at the convention center filled with talented artist from all over the area  showing their skill and selling their work.  You don’t have to love anime or manga to appreciate their talent.

If you don’t want to go to the convention but still want to get a taste of what it is like just hang around the Inner Harbor this weekend to see a constant parade of cosplayers.  The costumes created by fans can be extremely simple of very complex and intricate.  A great photo spot is by the fountains near the convention center. If you like some ones costume just say so, they’ll enjoy the complement. If you want a picture more than often they will oblige.  I’ll be there Friday, Saturday, Sunday making all sorts of amazing new friends. 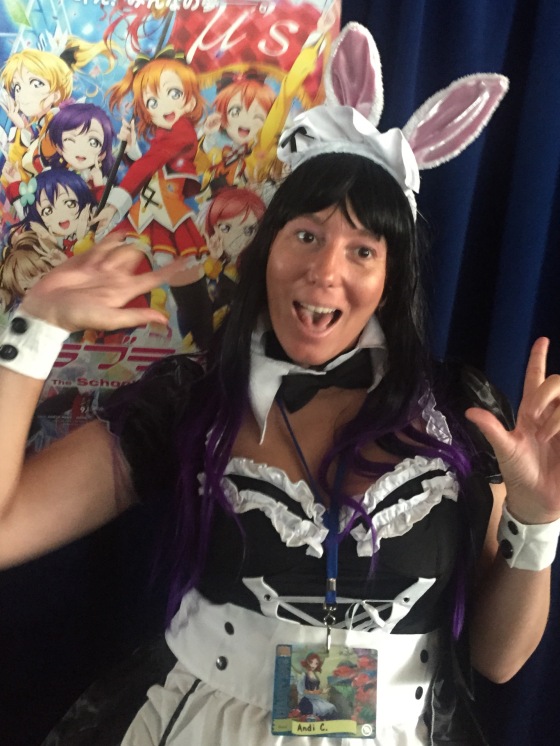 Andi Gilbert -This cute little bunny has a blood lust, so be careful. (Otakon 2015)

← Olympic Introduction
How to Travel Without Embarrassing Your Country →