You Can’t Control the Weather…

Posted by No Kids, Will Travel on February 28, 2016 in Adventure, Beaches, Mexico, Travel 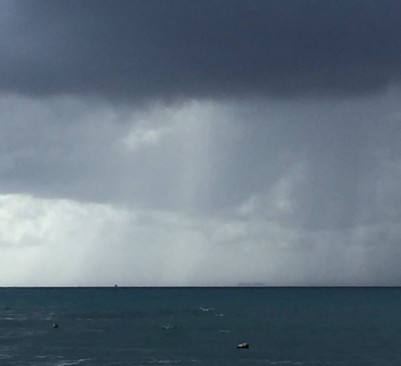 When you think of the Mexican Riveria you often think of 80-degree sun-filled days with the occasional lazy shower bringing just enough rain cool off the sand. The reality can be a little different. I’m not saying the weather was cold; we live in Pittsburgh, we know cold. The weather felt very comfortable, though the locals considered it chilly. For them it meant putting on a long-sleeve shirt instead of a short-sleeve one.

But we did have one big weather problem: WIND!

The wind from the east was racing across the water creating swells of almost five feet. The problem with that is the crystal clear water you’re used to seeing is more like looking through the brown glass of a beer bottle. The other serious problem is with waves like that the harbor master closes the port, shutting down all boat traffic except for very large ferry boats. That meant our SCUBA trip out to a reef was a no-go.

We were fortunate that the Yucatan has an abundance of cenotes.  A cenote is a natural pit or sinkhole created when the roof of a cave in an underground river system falls in and exposes the water. The small lakes are filled with fresh, clear water and are a great place to go for a swim when the sea isn’t an option. So we piled into a taxi cab (a whole different adventure in itself, see Taxi Cab Confessional to hear about that) and headed down the road to one of these amazing watering holes. The original trip to the reef was to leave off the beach right in front of the hotel, this was a 20-minute drive.

We pulled up to Cenote Jardin del Eden or Eden Cenote and knew it was a great idea. Unfortunately so did every other dive shop. The country has 6,000 cenotes and every shop in Playa del Carmen decided to spend the day at this one.  The 2-3 acre pool was packed with at least 30 divers. The water was much chiller than the sea water, too. We were fortunate to be wearing wetsuits.

The dive was very different than our last one as we followed our instructor in a lap around the pool over boulders and logs.  We were able to observe small fish, most the size of a finger, one or two maybe the size of your hand. The grey limestone, dull pewter fish, and green aquatic moss were muted and earthy — a very stark contrast compared to the bright yellows, blues and reds of a coral reef. 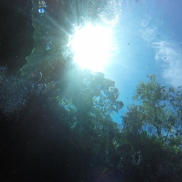 The sun shining above us 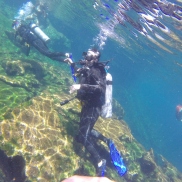 The place was crowded; we often bumped into other divers or were cut off by swimmers.  I was kicked hard in the face once by our own instructor. We just didn’t have a lot of space to move.

The idea of diving can be nerve-wracking for some, especially the anxiety prone like Amanda. After being bumped around a few too many times on our first lap, she tapped out and spent the next dive sitting on the dock letting the tiny fish nibble at her toes. I don’t fault her in the least for taking a seat. You are there to enjoy yourself, she tried it and had her fun, and then got out before there was a problem. For safety’s sake, getting out before having a panic attack 40 feet underwater was the wise choice.

I think it’s always good to push your limits, but knowing those limits before you push past them is even more important.  The experience was interesting and unique in a lot of ways. I mean when you describe it to someone it sounds cool: “I went SCUBA diving in collapsed cave in the middle of the jungle.” I wouldn’t mind using Scuba Playa again.  They did the best they could in a less-than-ideal weather situation.