Posted by No Kids, Will Travel on February 7, 2016 in United States

I initially was going to report on our most recent trip to Mexico and the all the things that went right, wrong and our second experience with SCUBA. But before we get to that, a near 20-year journey has come to an end and we couldn’t be happier.

My first paid reporting job was in high school for the local newspaper, circulation size 32,000. It never paid very much and I wasn’t going to win any awards doing stories for the “teen-beat,” but it was an introduction to journalism and the first step in a long journey. I then began writing for a smaller community newspaper while in college and would make about $15-20 per story.  The work for The View newspaper in Boonsboro kept my skills sharp as I tried other things from retail to teaching before landing my first TV job at WHAG in Hagerstown. I will be the first to admit the news director had no business hiring me (I had no television experience), but he took a chance and gave me a career.

He gave me the chance to grow beyond what I was hired to do, allowing me to report and produce as well. He gave me a job that gave me lifelong friends but, most importantly, the chance to meet the love of my life.

I left that job with a heavy heart, wishing to stay but it wasn’t in the cards. I needed to move up and move on and try something new and see where else this accidental career could take me. I ended up not far from home. It was an hour drive to Washington, DC along a commute many of my neighbors made. I would then spend the next 11 years at WJLA/NC8 working in the heart of DC. 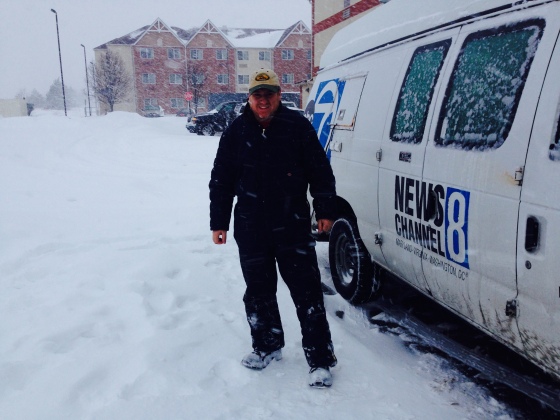 My days of covering record-breaking snowstorms are over.

I was able to witness the stuff of dreams, like  interviewing movie stars, and nightmares, like staring at bloody bodies in the street. I gained a greater perspective on life and the people who make up America.

You may know that for the last two years my wife Amanda has been pursuing an amazing career opportunity in Pittsburgh, Pennsylvania. I have held my job here in DC, making a 4 1/2 hour commute each weekend to share as much of the little time we have together as possible. The arrangement was only supposed to last a couple of months as I searched for work in Pittsburgh. The months stretched to almost exactly 2 years.

I am happy to say that our horrible, extended separation is coming to an end. I am leaving the job and career I’ve had for more than a decade to try something new. I will get to pursue my love of learning, helping to produce educational videos for the Allegheny Health Network. More importantly, I will get to wake up after a full night’s sleep next to my wife each and every day.

I will still have the chance to flex those skills writing here for No Kids, Will Travel.  I just won’t be paid for it anymore and won’t find myself spending eight hours each weekend traveling the Pennsylvania Turnpike just to see my wife for a few hours. We will get back to stories about our adventures (and misadventures) in Mexico next week, for now I’m just going think about what to do with all the time I’ll have tomorrow not traveling.

I simply cannot wait to try something new.

← The Art of the Carry-On
Taxi Cab Confessional →