Posted by No Kids, Will Travel on August 1, 2015 in Adventure, United States

My sister Andrea and I got to experience the amazingness that is Otakon in Baltimore last weekend.  Otakon is one of the largest Japanese anime, manga and culture conventions on the east coast. 30,000 fans crowd into the Baltimore Convention Center in costumes ranging from Love Live! (a show about school girl pop stars) to Voltron (a show about a large robot defending the planet), making it quite the spectacle. We (of course) had to go in costume too. My sister went as a teacher who dresses like a maid and wears bunny ears, but constantly tries to kill her students at a magic school.  I dressed as one of her students. 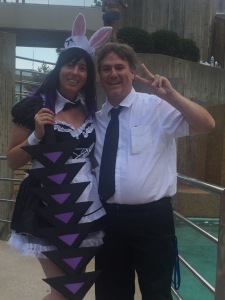 We know how to nerd out.

The con covers two hotels and the entire convention center with dealers, artists, panels, video premiers and exclusives. A few highlights from our trip include the panel called “Magical Girl to Mother Dragon Women in Anime.” This was a little academic but extremely interesting. For example, did you know all magical girls (e.g. Sailor Moon) can trace their roots back to Samantha in the U.S. television show Bewitched? We also sat in on a panel with production company Harmony Gold as the president told us about the Sony-backed Robotech movie. We sat in a concert with glow sticks watching the Love Live! cast (voice actors) concert video. 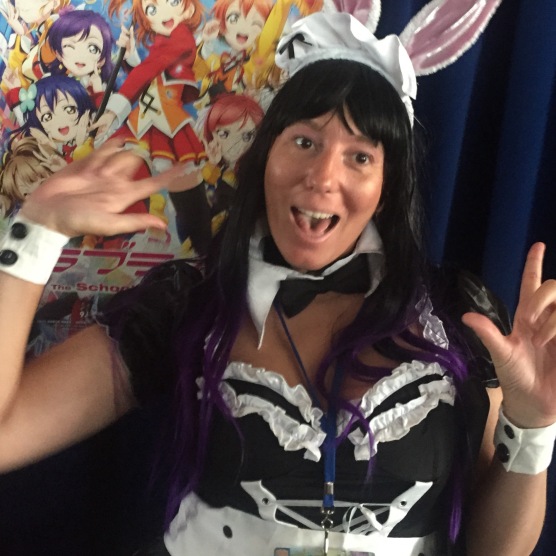 Andi Gilbert -This cute little bunny has a blood lust, so be careful. (Otakon 2015) 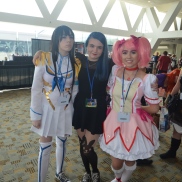 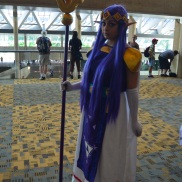 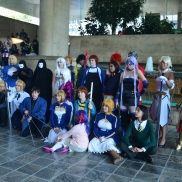 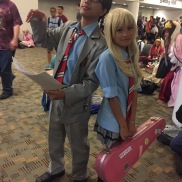 Even if you aren’t into Anime this story about to musicians is one of the best stories ever. 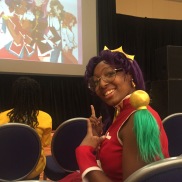 The cosplayer was happy to see her favorite character cited in the Women in Anime lecture. 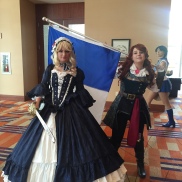 We must have walked miles over the weekend. We stayed in the Inner Harbor, a few blocks from the convention center at the Hilton Garden Inn.  The staff was very welcoming and used to the annual party and the fun cosplayers it brings.

The convention actually began on Thursday with a big outdoor concert, then continued through Sunday. The schedule of events often lasted until 2:00 in the morning, especially the dance parties with anime cover bands, EDM, and late-night viewing of 18+ anime (you need a special wrist band for those).

The panels we attended were all pretty good, some could have been better but all were good. One of the most fun aspects of the convention is that the program lists schedules and locations for group photo shoots. If you’re cospalying as one of the characters from the shows listed you can drop by while a gaggle of photographers take your pictures with other similar cosplayers. It’s great for people-watching and being impressed by the skill used to create the wearable works of art.

We exhausted ourselves but had immense fun. I think this passes ComicCon for my favorite convention.  I can’t wait to go back next year.