Posted by No Kids, Will Travel on November 2, 2014 in Adventure, China, Travel

I had my 20th high school reunion last month and had a lot of fun, the best part was we didn’t just sit around as Springsteen suggested and talk about “Glory Days,” we caught up on what each of us have been doing the last 20 years. I have to say one of the most interesting stories came from my friend Tiffany Butrum, who after getting a degree from University of Maryland in French and International Business, got a job, got bored, and chucked it all to go teach English in Shenzhen, Guangdong, China. She’s been there since 2012 and occasionally blogs about her experiences. Tiffany has generously given us access to her archives to broaden our reach at No Kids to include the occasional tidbit about China and South East Asia. So, here we go…

Well, I’ve been living in China for two years now, a venture that will end in two weeks, and I had yet to try the oh-so-pungent King of Fruit: Durian. I’ll admit, I was being a chicken about it. Last week, while at morning tea, some Chinese friends convinced me to try a durian pastry. It was odd, but not disgusting. I felt very proud of myself. But then my friend told me that the durian in the pastry had been mixed with sugar, flour, and other fruit and that fresh durian was much different. I felt obligated to try it before I leave for the States.

For those of you unfamiliar with durian, here is a little bit of info: 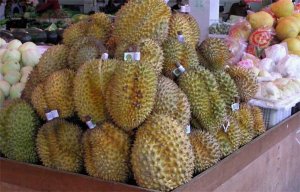 “Widely known and revered in southeast Asia as the “king of fruits”, the durian is distinctive for its large size, unique odour, and formidable thorn-covered husk. The fruit can grow as large as 30 centimetres (12 in) long and 15 centimetres (6 in) in diameter, and it typically weighs one to three kilograms (2 to 7 lb). Its shape ranges from oblong to round, the colour of its husk green to brown, and its flesh pale yellow to red, depending on the species.

The edible flesh emits a distinctive odour, strong and penetrating even when the husk is intact. Some people regard the durian as fragrant; others find the aroma overpowering and offensive. The smell evokes reactions from deep appreciation to intense disgust and has been described variously as almonds, rotten onions, turpentine and gym socks. The odour has led to the fruit’s banishment from certain hotels and public transportation in southeast Asia.

The durian, native to Brunei, Indonesia and Malaysia, has been known to the Western world for about 600 years. The 19th-century British naturalist Alfred Russel Wallace famously described its flesh as “a rich custard highly flavoured with almonds”. The flesh can be consumed at various stages of ripeness, and it is used to flavour a wide variety of savoury and sweet edibles in Southeast Asian cuisines. The seeds can also be eaten when cooked.”

“Penetrating” is a very good word to describe the smell. Two days ago I bought a package containing two sections of durian. Soon after placing the package in my refrigerator my entire apartment smelled like the fruit. When I was a kid and my friend’s parents would eat durian in their house I would have to go outside. The smell was so strong that it would trigger my gag reflex. But since I smell it every time I enter a supermarket here it no longer has that effect on me. For me, durian smells like a mixture of liquid amoxicillin (the pink stuff I had to drink as a child when I was sick), rotting vegetation, and sweaty armpit. One nagging question that always burns in my brain is who was the first person hungry enough to try this thing??

The texture is quite interesting for a fruit. It’s like egg custard with the fibrous pulp of a pumpkin added in. There is a thin skin around the puddingish part, but I’m afraid I can’t describe the seed as I didn’t get that far.

The taste is very difficult to describe because it was such a multisensory experience. I scooped up some of the soft custardy fruit onto my finger, held my nose, and gingerly swiped the fruit onto my tongue. Amazingly, with my nose held firmly shut, I could still smell it from inside my mouth. Its odour somehow hit the soft pallet of my mouth and traveled up and out my nose. I know that sounds weird, but that’s exactly what it was like. And it tasted very sweet; it was like sweetened pink stuff mixed with sweetened rotting vegetation and sweetened sweaty armpit. My jaw hurt with the urge to hurl, but I soldiered on. I took another swipe. It was still gross. I took another swipe. Nope. Still disgusting. One more swipe and I was convinced. Durian is so NOT the ‘King of Fruit’.

I immediately bagged it up, took it out, and then lysoled my apartment. Yet, after two carrots, a cucumber, a dozen cherry tomatoes, some cheese, a glass of milk, and three glasses of water, I could still taste the durian! It’s as if the taste has permeated my body just as the smell had permeated my apartment.

But now I can say I tried it. And again I ask: Who was the first starving schmoe who said “Hey, I can eat this!”?

← Spending a Day at the Baths
Dolphin Discovery →