We at No Kids, Will Travel (Amanda and myself) know how busy you are this time of year, so this week we are keeping it simple for your sake as well as our own.  The world’s cultures have many different ways to celebrate the New Year, from watching the fireworks light up Sydney Harbor Bridge at midnight to standing in New York’s Times Square watching the ball drop. The various Greek islands have their own traditions, too. Some celebrate in Sygtama Square with drinking and dancing, but the most common (and safest tradition in my opinion) is the making of New Year’s bread. The Vasilopita, or Bread for St. Basil, is served on New Year’s Day and is a common tradition in most Greek households.

The Legend of the Vasilopita

Saint Basil was serving as Archbishop in Caesarea, located along the modern day coast of Israel, when a band of thieves stole many valuables from the nearby villages.  The valuables were recovered by the authorities and the people were told to come to the treasury to claim them.  A big problem at the time was documentation; you didn’t necessarily get a printed receipt with each purchase in ancient times (or in modern Greece until recently). So, the people squabbled over which items belonged to whom. The job fell to the Bishop to come up with a solution.  St. Basil, as crazy as this idea sounds, told the women to bake all the valuables into a large pita.  The Bishop then had each of the wronged parties cut a slice from the large loaf and miraculously each person’s slice contained what had been taken from them.

The modern Greek household places a coin, (a dime in my family) into the dough and whoever cuts the slice with the dime in it gets good luck all year long. The tradition may vary, but by our tradition the first slice goes to the house, so if the dime is in it everyone gets good luck, followed by the father (yes, patriarchal tradition, deal with it) then the mother and on from the oldest to youngest child. If extended family is visiting for the New Year, the house if followed by the oldest male and descends from there.  The immediate house Changuris in my case goes: house, me, Amanda and then our cat, Storm.

We hope you have a happy and safe New Year, whatever traditions you may observe. 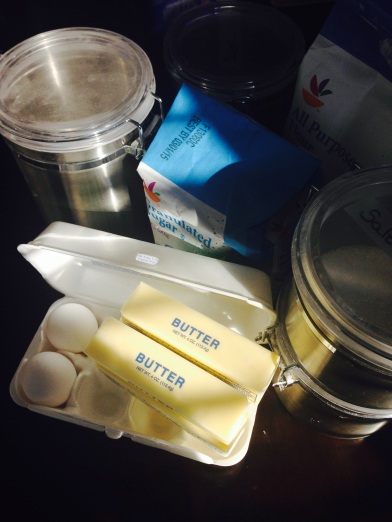 Mix yeast and water warm water and set aside. In a sauce pan simmer the cinnamon stick and orange rinds in 3 cups of water. Beat 6 eggs with butter and sugar then add cinnamon water. Add yeast mixture and salt. Add flour and dime to mixture gradually and kneed it until it forms a big ball. Put dough ball in to a large greased container and cover with a damp cloth and let the dough rise until it doubles (4 or more hours).

After the dough has risen punch the dough down then let it rise again for 45 minutes. Take dough and shape it into 3 loaves then place in greased pans. Beat remaining egg and then brush it across top of loaves. Let them rise again for 1 hour.

Place in oven at 350 for 1 hour before placing on a cooling rack.

If you are adding a dime to your loaf, I suggest sterilizing it in boiling water first, then wrapping it in foil before dropping it into the dough.

← Christmas Traditions Around the World
2013 in review →