A Short Stay in the Eternal City

Posted by No Kids, Will Travel on September 1, 2013 in Italy, Planning, Travel

When we hear someone speak of Rome the name alone evokes imagery of togas, Gladiators, pasta and more than 2,800 years of history. It’s called the Eternal City for a reason, and with all that history there are plenty of highlights to fill any trip. I have a short list based on a 2-day time frame of my must-see locations in Rome.

“You should see the Colosseum, Spaniard,” Proximo told Maximus in the movie Gladiator, and you should too. You will also be relieved to know 50,000 Romans won’t be sitting in the stands waiting for you to die at the hands of a well-trained killer. You will probably arrive by not slave cart, but Metro, the Roman underground. Fare is 1 euro or approximately $1.30. You can also get there by bus as we did. The Colosseum sits in the middle of a massive traffic circle and creates a juxtaposition of the ancient and modern, though the vibration and pollution coming from the cars is slowly destroying the symbol of Rome.

You’ll be presented with a lot of options for tours from the moment you get off the bus. The Colosseum is swarming with tour guides.  I will openly admit it is a game of roulette. You run the risk of ending up with a lousy guide whose English is less than great, but these guides often have already bought a book of tickets, $15 each, and you can skip the ticket line. If you have the patience to stand in line for 40 minutes on average, you can get the “Official Colosseum Guided Tour” for an additional $5.50. We were very fortunate; the guide we got was wonderful.

I haven’t taken the Walks of Italy Tour but my experience with their tours in Florence makes me comfortable recommending them for high-quality tours. You will need to book in advance. The tour includes VIP access to the arena floor, top tier, the underground as well as the forum and Palatine Hill, a 3.5-4 hour tour. If you can afford the $100 price tag you’ll get a quality tour with admission. The choice is yours: book in advance, take your chances with tour guide roulette, or just get rent the audio tour, it’s available near the ticket counter for $5.

Can you see why we recommend a guide in the Roman Forum? Every ruin has a story.

To this day, visitors leave flowers at the site where Cesar was assassinated by members of the Senate. 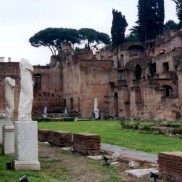 The temple of the Vestal Virgins in the Roman Forum.

The wide open space across from the Colosseum  is filled with crumbling ruins of the Roman Forum, the center of political and economic life in ancient Rome. The rules for finding a guide still apply, though many guides include the Forum in the price of your Colosseum Tour.  You will get the chance to see the spot where it is believed that Caesar was assassinated by the Senate of Rome in 44 BC; you might even see fresh flowers laid on the spot. The temple of the Vestal Virgins, the ancient order of nuns that tended the eternal flame of Rome in the temple of Goddess of the Hearth Vesta is also nested in the Forum.  If your guide is on his game he’ll tell you some of the naughtier stories of the temple, as well as the gruesome details of what happened if you “lost” your virginity. I do recommend a guide; unless you are really good at reading maps you will have trouble discerning one ruin from another.

The Pantheon (for its marvelous dome), the Spanish steps (for the great people watching) and the Trevi Fountain (for it iconic beauty) are quick stops you should squeeze in if you have time. If you only have two days to sight see, the only other place you need to go in Rome isn’t actually in Rome, because it’s its own country: the Vatican. The Vatican is the home of the Pope, the leader of the world’s billion-member Catholic Church and as many conspiracy theories as pieces of art. I recommend reading Dan Brown’s Angels & Demons as a conspiracy primer.

What We Missed (and why you shouldn’t)

I am going to admit right off, we have never been on a tour of Saint Peters or the Sistine Chapel, it was just bad timing on our part. But, I recommend doing it. The art housed in the Vatican is listed on the church’s balance sheets as $0, because it is truly priceless. The sculpture “Pieta,” Mary and Child (Jesus) by Michelangelo is considered to rival his David for his greatest work. The frescos on the wall are by almost every great master of renaissance art. The Sistine Chapel alone with its frescoed ceiling of the book of Genesis are worth the visit.  A friend of mine who is an atheist visited the Vatican and said it was the highlight of his trip. So, you don’t need to be religious to appreciate the treasure trove of religious art.

I would love to take a great tour and know there are many to choose from. The most highly recommended through my research are Context Tours, an often-cited but expensive tour company, and our favorite, Walking Tours of Italy.

Members of the Swiss Guard in Vatican City.

I have to explain, especially after raving about all the art work in the Vatican, the reason we didn’t do a tour. Neither of us are Catholic, so we ignorantly planned to visit the Vatican on our second day in Rome… which just happened to be Palm Sunday. Saint Peter’s Square was packed with pilgrims waving palms and Pope John Paul II was presiding over his final Palm Sunday mass, sitting on a golden throne and projected on a jumbo-tron. Again, we’re not Catholic, but we both had goosebumps (once we realized what was happening around us).

The Hotel Morgana at $111 a night is only a few blocks from the train station and the rest of Rome’s mass transit. The hotel has modern styling and an English-speaking staff that are willing to help you with arrangements while you are in town. The second is the pleasant Hotel Pomezia for $94 a night. The small hotel has wifi (today – they didn’t have it when we visited. Amanda fixed the computer at the front desk and earned a few minutes of time to send a quick email home) and is only a few blocks from the Pantheon in the Piazza Navona neighborhood. We stayed there a few years ago and found the rooms spartan but clean and the staff friendly.

I know many of us make Rome a quick stop on a larger tour of Italy and I hope that I am only confirming your instincts of what to do. You may meet someone who claims these sites are too touristy and not to go, but there is a reason they are filled with tourists and have been for centuries, they are unique and an important part of our collective global history and shouldn’t be missed.

← The Cost of Our African Safari
Fly Me to the Moon →