Posted by No Kids, Will Travel on June 30, 2013 in Beaches, Greece, Planning, Travel

Have you ever sat at your desk and dreamed of getting away to Greece? Spent hours staring at the Greece calendar hanging on your cubicle wall and fantasize of romantic vistas of whitewashed houses? Stacked up sugar cubes and imagined them as a Greek Island village? [Okay, I understand if I’m the only one who did that one.]  All of your village dreams of those caldera views that fill no less than seven of the 12 months of your calendar come from one Greek island: Thera. Never heard of it? Sure you have, just by its Latin name, Santorini.

I’ve visited the fabled location of Atlantis several times. It can be a destination that soaks up your island-hopping budget like a Scandinavian does sunscreen, but I’ve learned where to save and where to splurge.

If you’re going on an island hopping adventure your first splurge should be a plane ticket. The U.S. (not being as enlightened as the rest of the world) leaves its employees with just a couple of weeks of vacation a year, so making the most of your time is important. When you land in Athens spend that money and fly to Santorini and save a full day that would have otherwise been spent on the deck of a ferry boat, sailing from the Athens port of Piraeus to Santorini’s port of Fira (Thira). The plane will take you about two hours door to door, 45 minutes to one hour in the air. 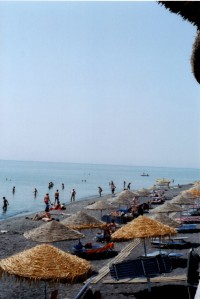 The black sand is HOT. Use caution.

First things first, you go to Santorini for the views, not the beaches. While the island has many good beaches, they are not the best in the islands. The beaches are unique and worth a visit because the volcanic eruption that shaped the island also deposited black and red sand on its shores.

Tip: make sure you have a pair of shoes or sandals you can use in the water. Do the math black sand + scorching sun = frakking hot.

The most popular beach is Kamari Beach, which is made of black stones and lined with hotels, taverns, restaurants and shops. It tends to get very crowded in July and August. A less popular beach is the Paralia Kokkini beach, the red sand beach, which is just past the archaeological dig site at Akrotiri. It’s less popular because it’s not located near one of the larger resorts and you have to take a bus to get there. There are a few accommodations nearby, as well as tavernas near the beach.

Splurge: Akrotiri is definitely one of the places you will want to visit even if you aren’t an ancient history buff; it’s just plain neat.  The ancient town of Akrotiri is Greece’s much older answer to Pompeii. When the island blew apart in a volcanic explosion around 1600 B.C. the town was buried under mountains of ash. The area has been covered (to protect the site) and gives you the eerie sense of walking in an underground city complete with streets, pots, tools and even multistory buildings, all much as they were before the town’s evacuation and burial.

Splurge:I would also recommend the Boutari Winery, just south of the archaeology park. The wine is outstanding, especially the Kretikos, a fruity, dry white wine said to be made from the same varietal grape the inhabitants of Akrotiri would have used. The winery is open to the public for tours and tastings. A flight of several wines is available as well as a tour and multimedia presentation. 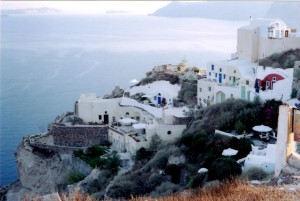 The iconic view of the caldera from Oia, Santorini

Save: You may have dreams about waking up in one of the whitewashed dove cove houses clinging to the cliffs overlooking the caldera, but unless you have significant means, your budget isn’t going to make that dream a reality. The cost of one of those beautiful hotels can easily set you back $300 to $600 a night. I suggest spending that money on a hotel in one of the island’s beach towns like Perissa or Kamari for more reasonable rates (starting at $100 per night). You can always take one of the frequent buses to the top of the caldera to have a meal and watch the sunset.

The most magical moment on Santorini: sunset.

Splurge: Have at least one meal at a restaurant on a terrace overlooking the caldera in either Oia or Fira. I would check a current travel guide  or a site like Trip Advisor for suggestions, as many restaurants can be great one trip and be terrible the next.

Save: Go to a local market and get yourself a bottle of wine and a plastic cup. Then find a spot along one of the walls overlooking the crescent-shaped caldera for the number attraction in Santorini, the sunset.  It’s one of the best in the world, mentioned in nearly every travel log written about the island. You’ll want to claim your space along the wall early; it fills up quickly. Bring your wine, a snack and someone to share the moment with and let yourself get caught up in an amazingly romantic moment at a bargain price. You should also keep your eyes out because sunset often brings out the diamonds with couples getting engaged at that very moment.

Save: You may want to shop, and we all do on vacation, but save your money here. You can find many of the products you’ll see in Fira for far less on the other islands. Although it goes without saying that if you see a piece of original jewelry you must have the decision is between you and your bank account.

Touristy Splurge: Take trip to Palea Kameni or Nea Kameni, the two smoldering volcanic islands in the center of the caldera. Even if you don’t smoke (yes, it’s bad for you), I suggest bumming a cigarette from someone so you can light it by placing the tip on the smoldering ground. The idea of walking on a smoldering volcano is surreal and makes a great story to tell your friends.

You really only need to spend a couple of nights on the island before moving on to your next stop. I suggest two nights because if you’re like me you’ll only be able to take the crowds for a limited time before you’ll start feeling overwhelmed with humanity. I’ll agree, as many do, that Santorini is one of those islands you have to visit once before you die. I’ve been three times, which is probably plenty, but I wouldn’t refuse to go again.