Flowers that Transplant Me

Posted by No Kids, Will Travel on June 2, 2013 in Beaches, Greece, Italy, Travel

When ever I see the long, spidery tendrils of bougainvillea they transplant me to the sun-drenched islands of summertime Greece.

Bougainvillea brighten views all over the island of Andros, Greece.

Bougainvillea cascade down a whitewashed wall in Batsi, Greece.

The thorny, wood-like vines with their green leaves and purple, red, or white flowers hanging from the roof tops and balconies of whitewashed homes along narrow village streets is one of the images of Greece that is always in the front of my mind. The hardy tropical plant thrives in the dry Mediterranean climate, despite being a non-native species. The plant, named after French Navy Admiral Louis Antione de Bougainville, is native to South America but truly began its proliferation around the world in the 19th century as it spread to the British colonies imported from nurseries in England.

The Indian Blanket (Gaillardia Pulchella) with its yellow-tipped ocher petals and its fuzzy reddish-brown center reminds me of a daisy (with a lot more character) and of the Outer Banks of North Carolina. 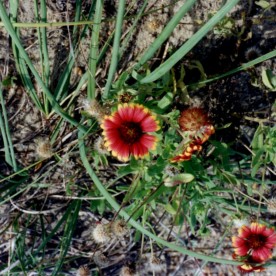 The Indian Blanket instantly transports me to the ocean.

The small native North American flower gives a spark of color to the sandy dunes along the coastline. The sight of this flower pulls the smell of salty air and the sandy isolation of a windswept beach from my memory. This simple flower brings back my best childhood memories of sitting on the beach my grandmother, Yia Yia,  singing to us as we took breaks from building sandcastles and playing in the surf.

The tall, bright yellow petals around the large, brown eye of a sunflower make many think of van Gogh and his wonderful paintings set in France.

I bought a sunflower for my bride during our honeymoon photo shoot in Florence, Italy. 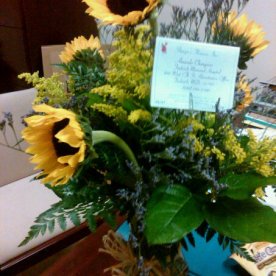 Proof: I sent these sunflowers to Amanda for the 7th anniversary of our first date.

But for me, this flower will always be connected to Italy (despite being a native American plant). The tall plant with its dark green stalks and richly-colored petals ever turning to the sun evokes memories of the amazing Tuscan light. If you have never been to Tuscany it’s hard to describe; its earthy color making everything feel aged and full of life at the same time. I also think of my wife, because I never give her roses, only sunflowers, because they are our flower. They’re simple and unique at the same time.

I only have to look at or smell these plants to be transported a thousand miles away and transplanted into a pleasant garden of memory.