I know, you’re thinking “that was a month ago!” but not if you’re Greek Orthodox.  The Orthodox Church does things a little old fashioned by using the old Julian calendar, which sets Orthodox Easter as the first Sunday after the first full moon following the vernal equinox (and Passover must always come before Easter). As a kid my siblings and I were very lucky, because of the timing of my mother’s protestant Easter and Greek Easter we often got two Easter baskets each.

As a child it was fun to have different traditions than my friends. Easter Sunday or Pascha, which is Hebrew for Passover, refers to the Jewish holiday celebrating the deliverance from slavery in Egypt. For Orthodox Christians “Passover” refers to deliverance from death to life, as Jesus is said to have risen from the dead.

I loved Easter even as a kid, I enjoy it more than Christmas, but before fun of Easter Sunday we had to “suffer” through the midnight service at church.  The Orthodox service is long, very long; I always thought it has something to do with the repeating of almost every litany three times. The neat part of the service for me always was the epitaphios, or the procession, the moment when we would follow the priest and his attendants outside of the church carrying candles.

When I was growing up, the town we lived in thought Orthodoxy was really exotic, so local press would show up and take photos as we walked around the church chanting by candle light. I remember vividly the need to duck under a neighbor’s clothesline as we walked in the dark around the church. The procession would end and everyone would say Christos anesti, “Christ has risen,” and respond by saying Alithos anesti, “truly he has risen”.  I still like that part today, both for the celebratory feeling and because it means my mother says its okay for us to sneak out the back and go home. [Note from the Greek-by-marriage Amanda: I had NO CLUE there was more to the service after the procession!] We have to rest up; we had a party in the afternoon.

Family and friends, who are not all Greek (but I’m sure they wish they were), gather at my parents’ house for a big feast, and I’m talking big, my mother makes enough food for an army.  The scene in “My Big Fat Greek Wedding” is pretty true to life; they have the lamb on a spit in the front yard. We hold onto some of our traditions, by making a special soup, cooking lamb, and dying all our Easter eggs red. 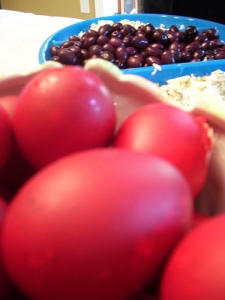 The red dye represents the blood of Christ and the hard shell symbolizes the tomb. After dinner we have what is called tsougrisma, an egg tapping competition. The party guests take hard-boiled eggs from the bowl and try to crack others’ eggs by tapping their egg against it, the person whose egg survives the tourney is said to be blessed with luck and get bragging rights (the rest of us get egg salad for a week). It’s rumored my great-grandmother’s win streak was due to a marble egg.

We still have an Easter egg hunt for the little kids using more (American) traditional plastic eggs in the yard. We play bocce and croquet, and the youngest get Easter baskets.  But the wonderful celebration in which we blend what we call American Easter and Greek Easter is my favorite holiday of the year, because it means spring is here and summer sunshine is on its way.